This document assumes you have already studied the VATUSA S1 CBT: https://www.vatusa.net/cbt. Please refer to those CBTs for more background and guidance about the Clearance Delivery ATC position.

Clearance Delivery provides weather briefings and VFR/IFR departure clearances. The DEL controller shall also coordinate with the Departure/Approach (APP) controller to issue pilots the preferred routings. Clearance Delivery does not issue instructions to an aircraft that involves any movement. Once the clearance has been issued to the pilot then you instruct them to contact the Ground Controller or the next higher controller.

As a Delivery Controller, it is extremely important to understand all the data in a flight plan. Mistakes must be corrected here before the plane is airborne. If an error is not caught then the workload for other controllers down the line is affected.

All  IFR aircraft will need clearance to depart from any airport. When issuing IFR clearances keep in mind the C.R.A.F.T. acronym. 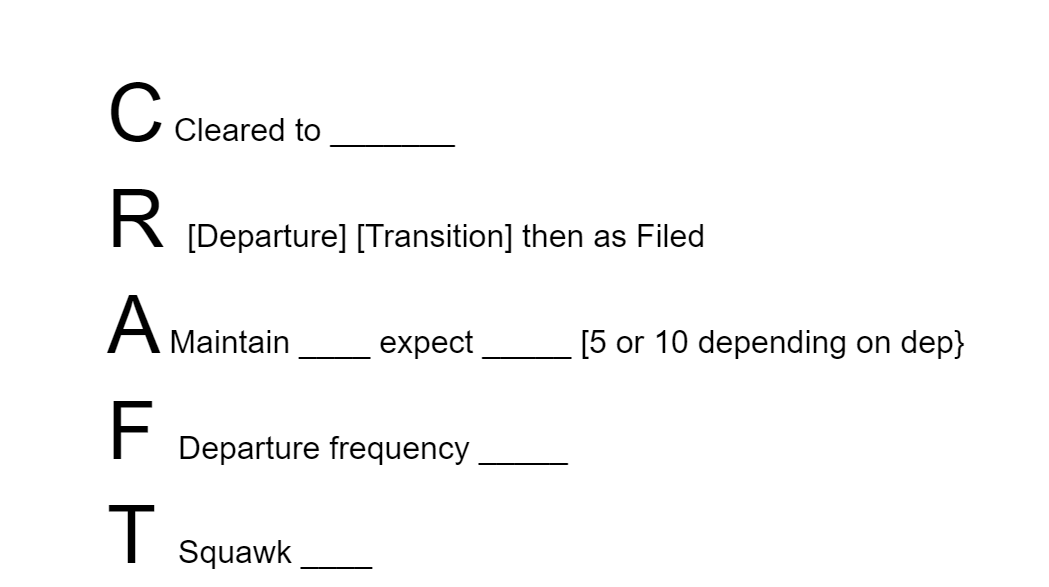 All VFR aircraft wishing to depart Class B or C airports must contact Clearance Delivery prior to requesting taxi. At Portland, per SOP 102, the aircraft must be given a squawk code, altitude to remain at or below (3,500 [props] or 6000 [jets/turboprops]), and the departure controller's frequency.

After a correct read back from the pilot, instruct them to contact the next highest-available controller for taxi and advise them of the current ATIS letter.

At Class D airports, aircraft do not require a VFR clearance and can contact Ground control when ready to taxi.

Many airports have designated departure procedures or SIDs (Standard Instrument Departures). They can be published charts or simple verbal instructions given by the controller. A DP/SID is a published departure that instructs a pilot on how to exit the terminal area. They were created to relieve the controller's workload. Some contain specified turns and/or altitude restrictions and some don't. A SID transition is an extension beyond the common point of the SID to a waypoint further downrange which will usually join an airway or an arrival into another airport. Some SIDs require a transition assigned, check the routing on the chart. There are four types of Departure Procedures:

In Portland, Departure Procedures are preferred to be used as much as possible. If the aircraft does not file for the approved Departure Procedure (DP) then issue the appropriate DP for the route of flight. When issuing clearance it is a good practice to have the departure charts printed out and within reach for quick reference. 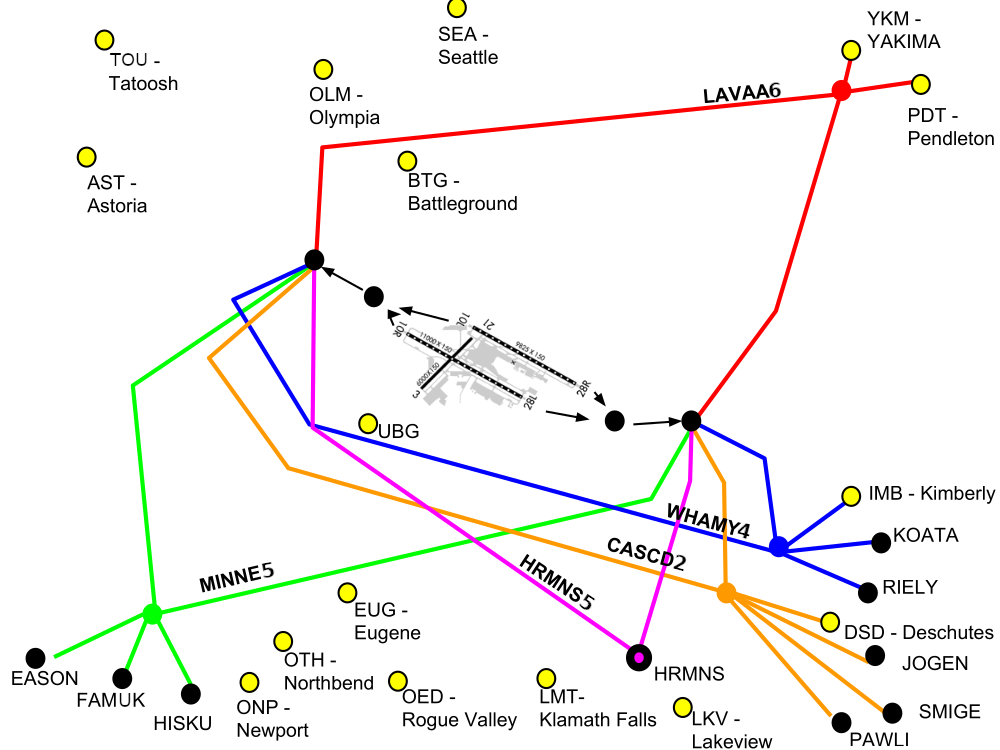 There may be times where pilots cannot accept a standard instrument departure due to a factor of reasons, the main being a lack of navigational equipment required for said departure procedure or the inability to fly it due to lack of experience on the aircraft.

If the pilot files remarks of "NO SID" or cannot accept an assigned SID, then they may be cleared via vectors to an airway or the first waypoint on their flight plan.

The Clearance Delivery controller must inform and coordinate with the Departure/Approach or Center controller of any irregular departures in a timely fashion to avoid delays and assure the expeditious flow of traffic.

This is especially true if an aircraft requests direct to a fix, intersection, or NAVAID that is beyond the TRACON/EN-ROUTE airspace or that is known to be an arrival fix (HELNS, VANTZ, HHOOD)

Remember that it is your responsibility to obtain a correct read back from the pilot. If you have made any changes to the flight plan, you must read the entire amended route to the pilot as part of their clearance.

The Clearance Delivery Controller is required to know the proper altitudes for the direction of flight. The general rule of thumb is NEODD and SWEVEN. Any altitude including and above 18,000 MSL is called a Flight Level. (FL)

The reason for the increased altitude intervals is due to the fact that all airspace above FL410 is not considered RVSM space, and thus require additional vertical separation according to airspace requirements.

What counts for "north/eastbound" or "south/westbound" is the magnetic course when the plane is up at cruise altitude, which means you don't count the departure procedure if it goes the other way. For instance, the ELMAA SID starts out going west, but most routes then go southeast to California, etc., and by the time the plane is up at cruise altitude, it will be done going west and now is southeast-bound; so the specified cruise altitude should follow the north/eastbound rule.

You'll need to have an IFR en route chart available if you're not sure which magnetic course will be used. As a rule of thumb, every major airport in the lower 48 United States is East of KSEA, even Portland and Eugene; CYVR (Vancouver) is west, as are all airports in Alaska.

In this case, if a pilot requested FL180 with an altimeter setting of 29.91 inHg or below, then the proper phraseology to include requesting the pilot to accept a different altitude, then offer the pilot a range. Example: "CALLSIGN, FL180 unavailable. Can you accept 16,000 or FL200?" assuming the aircraft is on a SW/EVEN altitude.