To help controllers learn about VFR on VATSIM, we have prepared this brief explanation of how to control VFR aircraft. All of these instructions are for use only on  VATSIM -- there are some situations in the real world that would be handled differently.

The key things a controller working VFR flights must remember are as follows:

1. You (the air traffic controller) do NOT provide vectors (headings and altitudes) except in rare situations; instead, the pilot is responsible for navigation and terrain avoidance.

3. Because of #1 and #2, the pilot must be able to see clearly several miles away at all times. Therefore, Visual Meteorological Conditions (VMC) must prevail where the pilot is flying VFR. Without getting into the complexities of  "exceptions," the VFR rules say that an airport must have a ceiling of 1000 feet or more, and a visibility of 3 miles or more. If the weather is worse than that, the airport is "IFR" and you advise pilots that they will need to fly IFR ("the airport is closed to all VFR operations").

4. Any VFR aircraft not in the vicinity of an airport (typically more than 5 miles away) is usually NOT required to talk to ATC at all! (There are some exceptions - - see below).

REMEMBER ALL VFR AIRCRAFT MUST HAVE A UNIQUE SQUAWK IN CLASS BRAVO AND CHARLIE AIRSPACE! (see below)

A VFR pilot can ask for (controllers do not ask pilots if they want Flight Following) VFR Flight Following,  either when they are about to depart an airport (in any Class of airspace) or in the air.  Pilots do this because they want a radar controller to help them spot other airplanes, and to have someone monitoring them on the radio in case of emergency.  In this case, you treat the aircraft just like any other VFR aircraft, except they get a discrete squawk code (even at a class D airport).

Technically, a VFR pilot does not need to file a flight plan at all. If an aircraft calls you and says he's ready to depart VFR and you don't see a flight plan for them, you don't need to ask the pilot to file one. (If, however, he is departing from a Class B or Class C airport,  then you may create a flight plan.)  VFR flights are not given route clearances at all. In other words, IF they file a plan at all they do not have to file waypoints or fixes. That being said, it’s not a bad idea to file a route even when flying VFR. In the real world, you would want someone to know where to look for you if you didn’t return home that day.

1. The departure "procedure" (see below);

3. The runway they are using (and the intersection if they're not at the end); and 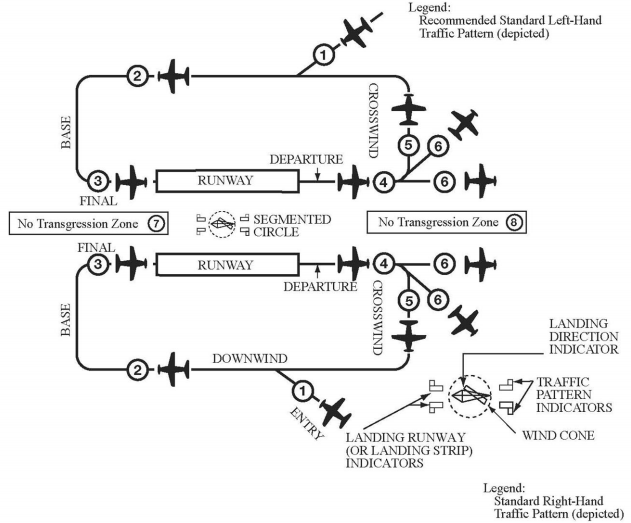 The departure procedure requires an explanation because it is different than an IFR Departure Procedure. First, we need to remember the traffic pattern. If the runway uses the "standard traffic pattern," all turns are made to the left, as shown in this diagram. (Some runways use a "right hand" traffic pattern, where everything is the  same but all turns are made to the right.)  Let's assume you're using Runway 9. The following table shows what departure procedure to use depending on which direction the pilot is going:

“Hillsboro Tower, Cessna 123AB is VFR departure to the North/South/East/West, ready to go at GA Parking”

Note: As soon as the aircraft is acknowledged, the requirement to operate in the class delta airspace has been met.

Aircraft in the pattern at a busy airport can create problems if you’re not careful.  A pilot flying the pattern can generally make his legs as long or as short as he wants.  If you have other aircraft on approach, or maybe someone else in the pattern, you could potentially end up with a conflict.  Therefore, the following is recommended:

1. Give aircraft specific instructions about when to contact you such as, “Report midfield downwind,” or, “Report 3 mile final.”

2. If you’ve got aircraft on approach that could cause a problem, take control of the pattern aircraft.  Have the pilot extend the downwind leg, or tell them, “I will call your base.”  This way, they won’t just turn into oncoming traffic.

3. Use traffic advisories often.  You can also have one aircraft follow another in the pattern.  This can save you a lot of work giving each individual plane directions.

4. Finally, don’t be afraid to limit the amount of traffic in the pattern or to close the  pattern altogether.  Reserve this option for when you really can’t handle any more traffic.  However, if you can, allow the pilots to have fun and fly.

The aircraft is NOT departing; so a departure instruction is not necessary, just pattern direction.

"Report midfield downwind" is especially useful when busy so you know to issue your landing clearance.

Arriving aircraft will contact the Tower when they are 5 to 10 miles from the airport, and they should give you their position and intentions (such as, "11 miles northwest, inbound for landing," or "over Elliot Bay, inbound for touch and go's").  Again, you won't be able to tell who is who, because all aircraft squawking 1200 are just identified with a box on the VRC screen, along with their Mode C altitude.  Based on their position, you should give instructions on how to enter the traffic pattern and when to call again. Something like "Enter left traffic for Runway 9, report midfield  downwind," or "Make straight-in to Runway 9, report 2-mile final." See the following chart that goes along with our example above using Runway 9:

Again, you don't tell the pilot what heading to fly, or exactly what altitude. You just tell them how to get into the pattern.  Your job is to plan sufficient spacing between each plane to make safe landings. If necessary, help a pilot spot another plane to follow: "Traffic is off your nose and 2 miles, a Cessna, follow that traffic on downwind." That way, it is the pilot's job to maintain good separation.  Once a plane is on the downwind leg (or on about a two-mile final), clear them to land. If another plane (or two) will be landing first, say, "You are number two [or three] for  landing." You don't tell them when to turn base unless you need to put more separation  between them and the preceding aircraft (in which case, say "I'll call your base turn for  traffic.")

The tower controller will issue one of the following clearances to aircraft arriving at the airport.

Aircraft approaching a Class D airport but not intending to land there (just to fly over) will contact the TWR. They should be given a minimum altitude to maintain (usually 500 feet above traffic pattern, "Maintain at or above 2000 feet") to keep them away from arriving and departing aircraft. When time permits, you can give transiting pilots traffic alerts to help them avoid other planes. VFR pilots in a Class Delta airspace are responsible for their own safety and separation.

If saying the position from the first aircraft is difficult you can say their position in the pattern.

If the second aircraft has the first in sight you can say:

If you end up having traffic on the runway or flying over the runway that will cause a problem you could say:

"(Callsign), go around, traffic on the runway."

Class B or C Airport (Tower and Ground Controllers)

1. Cleared to operate in the Class Bravo airspace;

4. Squawk XXXX. (Standard squawk code is given at that airport)

**NOTE: You should have already determined if the pilot has requested flight following once clear of the Class B. If so, issue the frequency of the controller that will be providing radar services to the pilot. If not, you can omit this from the clearance.

Notice what is missing compared to the usual IFR clearance? No "cleared to" the destination, no specific altitudes to fly.  Normally you want the pilot to fly one of the standard VFR departure patterns when leaving a Class B airport because you want to get that plane away from the (usually faster) IFR traffic coming in and out. That's why you give specific limiting altitude. The aircraft contacts GND for taxi and then TWR for takeoff. After clearing the aircraft for takeoff, the TWR should remind the pilot to "Maintain VFR at all times" -- in other words, if an altitude takes a plane toward a cloud, the pilot MUST tell the TWR so the TWR can approve deviations. Finally, when the plane leaves the Class B airspace, the TWR controller says,  "Radar services terminated, Squawk 1200, maintain VFR, frequency change approved, good day."

“Seattle Tower, Cessna 123AB is VFR departure to the North/South/East/West, ready to go at GA Parking”

Note:  Now, in our 1st transmission to the aircraft, we have established two-way radio communications, assigned the unique squawk code, and issued a verbal clearance to operate. All requirements have been met. The remainder of the exchange HAS NOT CHANGED

Aircraft landing at an airport within Class B or Class C airspace are required to contact the appropriate ATC facility before entering the airspace. Usually, if the plane is small and coming in under the airspace, they will contact TWR first. The TWR controller assigns a unique squawk code and advises the pilot how to approach the airport (usually similar to Class D arrivals, such as "report entering left downwind"). The only difference is that usually, you don't want them on a long final approach to the runway, since you'll probably have high-speed IFR aircraft coming down that approach path. A close-in base turn is almost always preferable. Additionally, before entering Class B airspace the aircraft needs a CLASS BRAVO Clearance "Cleared into the Seattle Class Bravo airspace".

Aircraft approaching an airport in Class B or C but not intending to land there (just to fly over) and flying at a low level (below the airspace until within about 5 miles of the airport) will contact the TWR. These should be treated just like arriving aircraft, with a squawk code, advice on how to transit the airport (such as "Cross the airport at the approach end of Runway 16"), and an altitude to maintain.