If you have some time, check out this video of a real-world controller working Seattle Final Approach. It gives a great example of how final approach sequencing works, as well as the surrounding traffic flows. The basic approach sectors below are most common with how we simulate them on VATSIM:

*Reference only, not for real-world use

The following is not a requirement of how KBFI arrivals must be handled, but a description of how they are often handled in the real world. 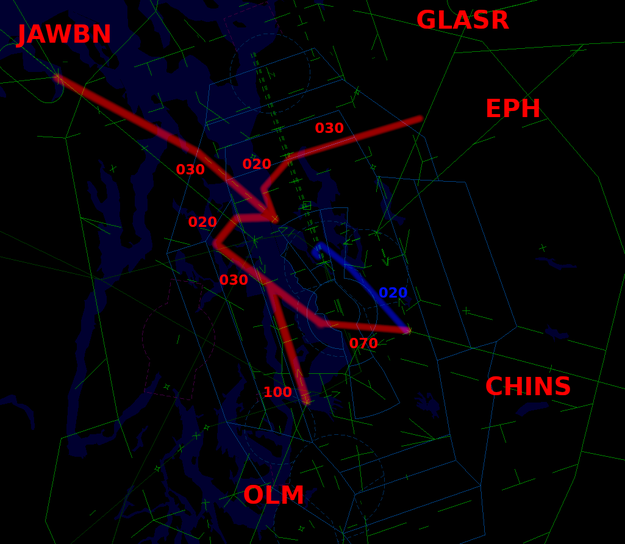 Once entering the S46, arrivals from the north (JAWBN/GLASR) are descended down to 3000 (as MVA allows). This keeps them below traffic being vectored into KSEA.

OLM arrivals should be descending to cross ARVAD at 13000 as published. Turning them north at or before ARVAD keeps them west of the HAWKZ stream into KSEA as needed. They can be descended to 3000 as they turn north and then join a downwind heading.

CHINS arrivals are crossed over the south end of KSEA at or above 7000. Once past KSEA, they should turn downwind and descend to 3000 as they pass under the HAWKZ stream into KSEA.

The ILS 14R approach has aircraft intercept the glideslope at ISOGE at 2200. A Hold In Lieu is depicted at ISOGE but aircraft can also be cleared straight in or vectored to intercept (in accordance with 7110.65 4-8-1).

When conditions allow, a visual approach can also be useful. The charted Harbor Visual for 14R has minimums of 3100 foot ceiling and 4 miles visibility.

Smaller aircraft arriving from the southwest in VMC may be able to enter the left downwind.

KBFI has 4 SIDs, two for north flow and two for south flow. Each flow has one RNAV SID and one non-RNAV. The southbound SIDs basically establish departures on heading 135 at 2000 feet.

NRVNA - RNAV - Aircraft can climb via SID, published top altitude is 2000. After reaching NRVNA (just west of AUBRN) they will expect radar vectors.

KENT – Hybrid – Aircraft can climb via SID, published top altitude is 2000. After reaching ZIGED (just south of AUBRN) they will expect radar vectors.

In real life, many jet aircraft departing KBFI are able to out-climb aircraft departing from KSEA further to the south. Of course, this depends on a quick climb instruction from approach, and response from the pilot. Watch the altitudes and coordinate with other traffic as needed.

KBFI receives a large amount of VFR traffic in the real world in addition to IFR. The following procedures are provided by King County, which operates the airport. Some of the procedures are for noise abatement, but they also ensure VFR aircraft stay clear of the Class B and KSEA/IFR traffic. Though we can't count on VATSIM pilots having all the VFR landmarks, it would be fun to try for those that do.

Example phraseology for an aircraft taking the Vashon departure:

CESSNA 24X, CLEARED FOR TAKEOFF, MAKE A RIGHT DOWNWIND DEPARTURE IN CLOSE AT OR BELOW 800 FEET UNTIL MIDFIELD THEN A LEFT TURN WESTBOUND APPROVED. (Traffic a Heavy Boeing 747 overhead on final above for SeaTac, caution wake turbulence.)

Example phraseology for an aircraft on the Green Lake arrival: 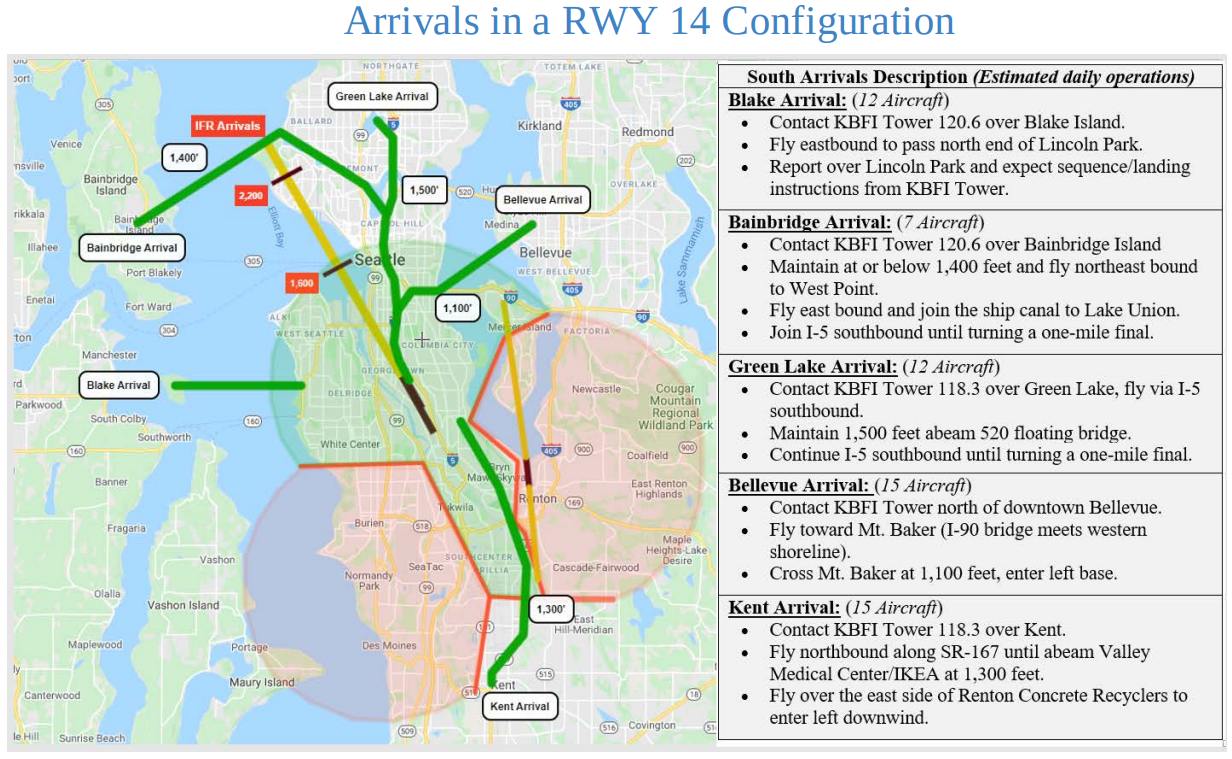 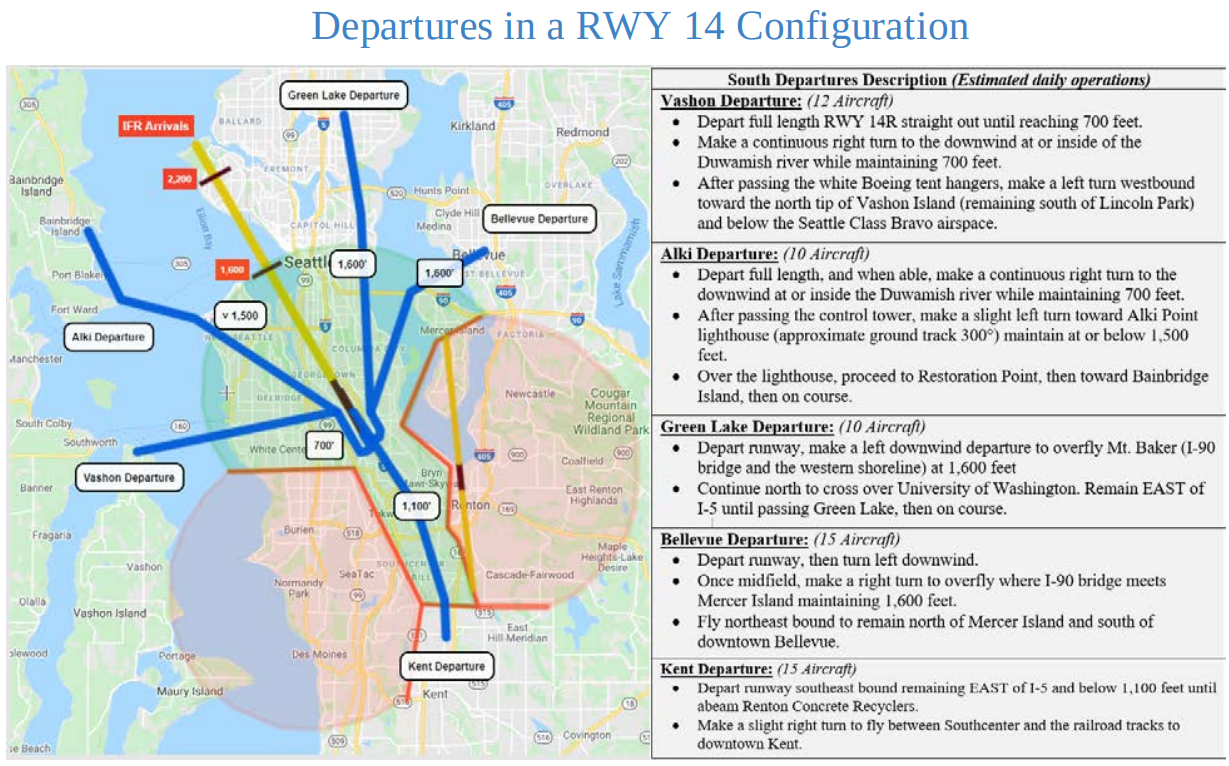 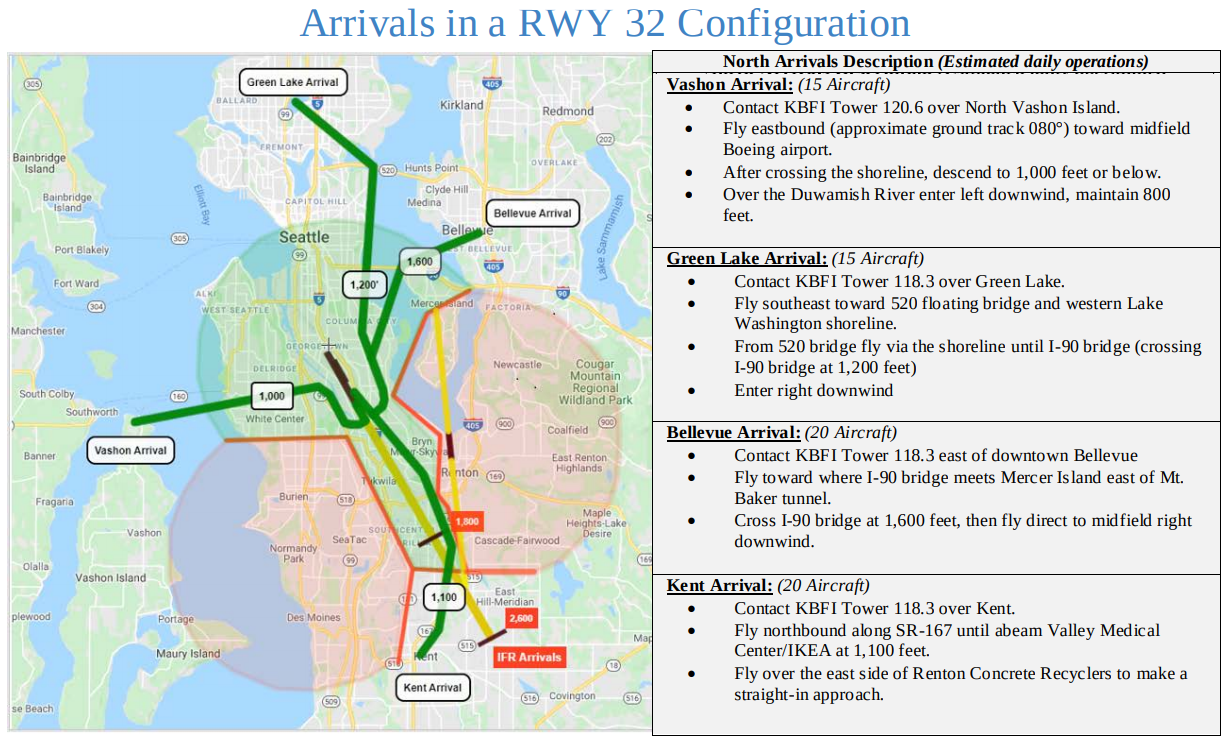 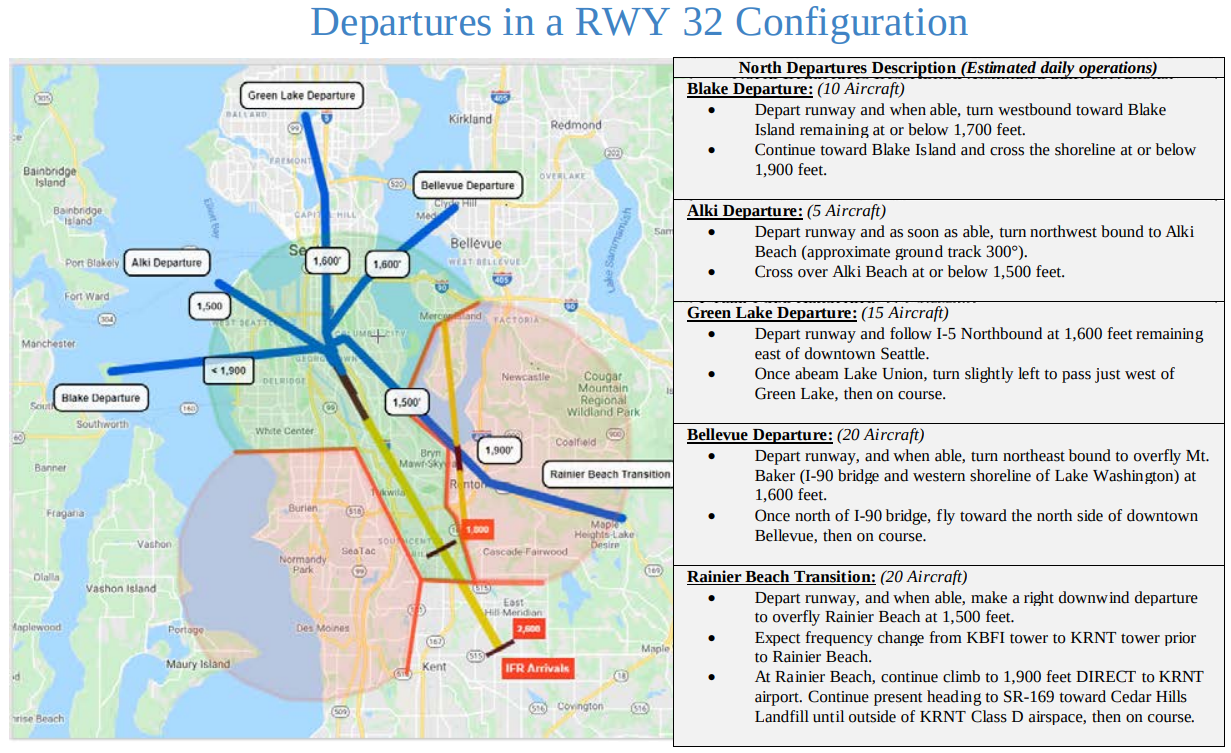